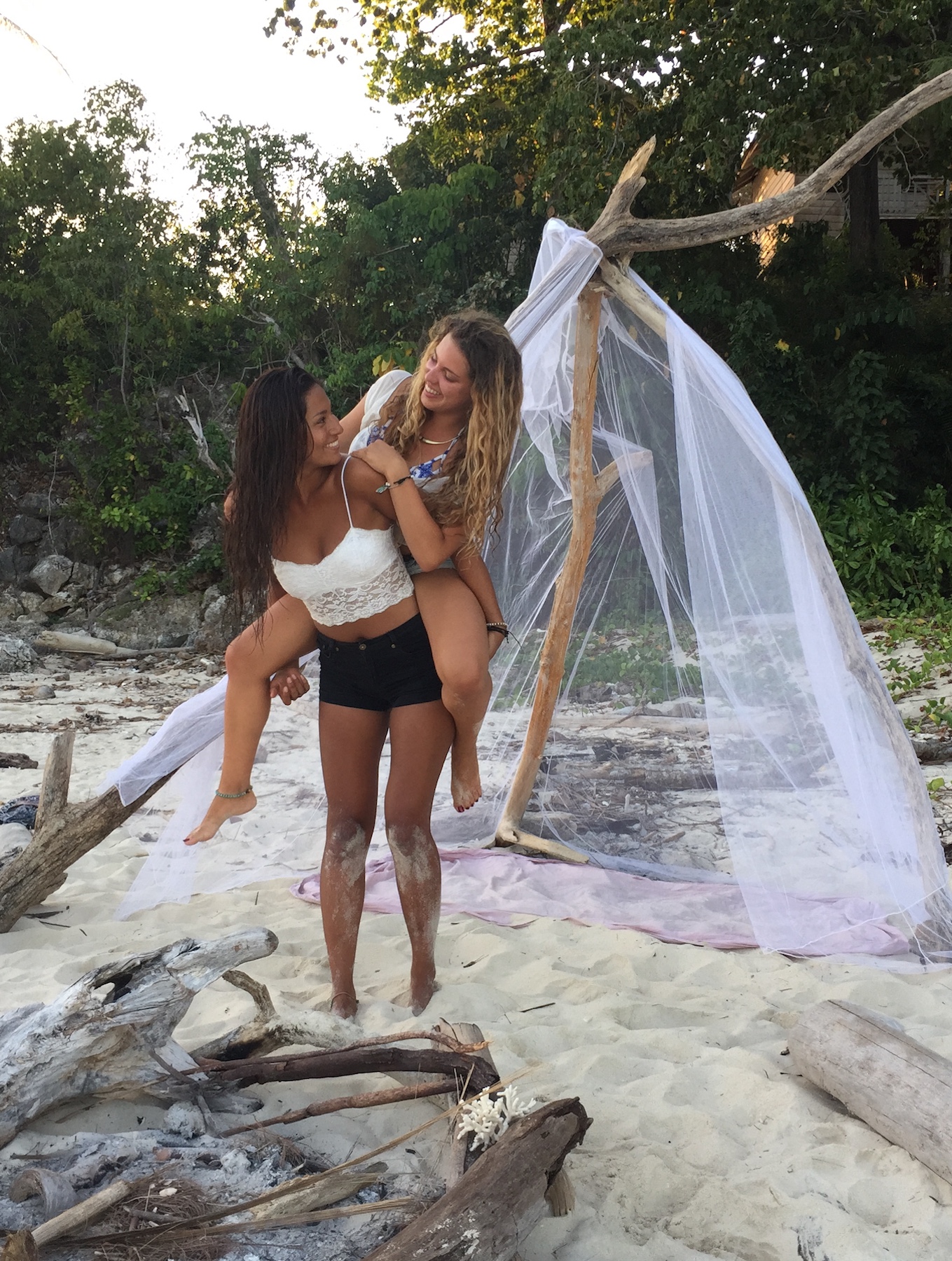 The First Time I Heard About The Togian Islands

It was February 2015. We were three 19 year old girls cruising around Sulawesi, Indonesia. I remember the exact setting only vaguely. The storyline, however, I will never forget. There is no way to forget your vacation that turned into an Indonesian Secret Island Escape.

I recall the first time I heard my friend mention the beautiful Togian Islands. “Paradisiac” and “Out of this world” she said. You can simply type the name into google to see what I mean. Stunning, really. Tropical jungle, dreamy beaches, cloud-free sun-kissed skies, palms swaying around you…

It definitely sounded like a place we absolutely had to visit!

I remember the journey there being horrible. I think it took us about 6 hours on a bus – only to arrive at a port where a ferry awaited us. Then we endured another 8 hours of swaying from side to side in a pretty 8 rudimental ship crashing against the rough ocean. Alright, maybe I am exaggerating a bit, but it definitely felt like we sat there for ages. It was crowded, sticky, and humid. Thank god I am not someone who easily gets seasick. “It will all be worth it” – a voice kept repeating in my head.

Finally, we arrived. Well, not entirely. We got off on the main island and took another smaller boat to the island we would spend the next 4 days at. Like I said, it took forever.

Our resort was pretty nice. We stayed in a small wooden hut that had a ladder you needed to climb to enter it. The room itself was basic, but cute. A massive bed was shared between the three of us, and a white mosquito net covered it. We were so happy to finally be there.

The next 2 days were filled with activities.

We went for jungle hikes, explored the island, ate tons of rice with vegetables, cruised to the neighbouring islands on small boats the resort provided, swam in a lake with non-poisonous jellyfish, watched magical sunsets, played cards, and so much more!

One day, we were coming back with the boat from an afternoon activity and one of us – I don’t even remember who – suddenly got a glimpse of an island that seemed to be abandoned. We asked our tour guide about it and he started chattering about how they tried to build something there once, but then left it unfinished. He mentioned that a few tourists sometimes go there to have a story to tell. “You can book a private boat from the resort and we can get you there if you want, you know? It’s cheap” – he said.

We looked at each other. The idea we had next came rolling into our minds so quickly, there was no way anyone could have stopped us.

“Hey…” – we started – “would it be possible to like, you know… also stay the night there? You know… like, could you take us there in the morning and pick us up the next morning?”

And that was that.

We packed our bags with a few bikinis, a mosquito net, a huge bowl of food, a nice big watermelon, a couple bottles of water, and charged our phones to the fullest. 9 am drop off, 9 am next day pick up. Directions seemed to be clear and understood by everybody.

Boy, did we enjoy that day. As soon as the boat left and we knew we were all alone on the island, we got naked and started running around like mad women. Freedom had never felt so real, never mind the idyllic location!

I don’t remember anything we didn’t do. We sang, swam, wandered around, ate, took photos, danced, and talked for hours. Suddenly, it was sunset, and it was the most wonderful sunset of the whole trip. We even started a bonfire. At this point we felt like real jungle goddesses.

I swear we looked at the stars for hours, until eventually our eyes started naturally closing. We had all completely lost sense of time.

We were just about to put out the fire when we heard something. I know this sounds like the typical horror story but I promise you, we couldn’t believe it either. “Must be our minds tricking us” we thought. But no, the noise kept on breaking the silence and it felt as though somebody was approaching the island. A boat, no doubt. We then heard voices, followed by footsteps, and then…we saw male figures approaching us. Three silhouettes appeared in the pure darkness of the night. They had bottles swinging in their hands and you could see their white teeth shining from the distance. We were frightened.

After what felt like hours waiting on the edge of our nerves, their faces lit up from the light of our fire, and we were able to recognise one of them. They were all working at the resort we stayed at. What we didn’t really understand was why they were approaching us at night, why they were alone, and why they had what seemed like alcohol bottles with them. It was the sketchiest situation I had ever been in.

“This is the island we always come to after work, to chill out and drink our home-made wine” – they said. Without asking for permission, they sat right next to us and started drinking. Then they started talking in Indonesian. We obviously couldn’t understand a word of what they were saying. I looked at both of my friends, and saw them frowning. Finally, I found the courage to ask them – kindly – if they could leave. I explained  that the whole idea about sleeping alone on the island, was to be, of course, alone.

They didn’t care. They stayed, and they kept on drinking.

There was no way we would go to sleep with those men around, of course, so we kept or guard up. It wasn’t until after a really long time, that we decided to be rude. We basically told them to get the f**k out, or else there would be consequences.

You could tell they weren’t happy, though, and that left us preoccupied. We kept hearing weird noises and seeing shadows. Little animals became so loud that at one point we even thought they were wild dogs….

Long story short, it was the worst night of our lives.

Fast forward to sunrise and we couldn’t believe that all of that had happened in less than 24 hours. We decided to enjoy what was left of our adventure and eat our delicious watermelon for breakfast.

“What a crazy story to tell our friends back home” – my friend remarked.

Little did we know how much crazier the story would get.

We went back to the improvised campsite which was basically a mosquito net tightened around three big trunks of wood. We packed our bags, took some last pictures, and looked at the time. 5 to 9 it was, I remember clearly. We sat down and waited.

If you are guessing what happened next… you are right. They didn’t come.

With every half hour that passed our bellies started to get more hungry, our throats more thirsty and our minds more desperate. It didn’t help knowing that we had no food left, maybe a glass of water or so to share between 3 people, only 5% of battery on two of our phones (1 was already dead), and worst of all, no phone reception whatsoever.

When the afternoon palm shadows started to spread across the floor, we gave up on the idea that they were coming to pick us up. “We could swim to the next island and see what we find” – I proposed. Obviously my friends laughed at my desperate attempt, but man did I mean it!

We thought our best chance was to explore the island further in case we had missed something, and so we did. Finally, by what seemed like a miracle, we found a little spot on the east side of the island that had what we thought was impossible to find.

Lara, one of the two girls, took all the courage she had and tried calling her mother, who lived in Barcelona. Thank god she answered.

I remember her starting the conversation with a confident and mature voice, then crumbling in tears after 30 seconds. Her mother, shocked but at the same time acting very calm, knew exactly what to do.

We waited for what felt like days, months really. At this point we didn’t even care about making conversation with each other because we were all too tense, starving and grumpy. Not the best combination. Then, the phone rang. It was already getting dark at this point.

“I talked to the lady at the resort” – she started – “they said they can’t come to pick you up tonight. The waves are too high. They are worried the boat will sink on the way…”

Obviously she had no idea about the circumstances. Another night on that island seemed far off the table for us. There was no way we could endure the scary noises, the thirst, the mosquitos, and building the campfire again… it all seemed too overwhelming.

This would be the part of the movie where people start to die, but since you are reading my story you obviously know we made it out of there alive. I cannot tell you how much our faces lit up once we saw a small boat crashing through the waves towards us. An even smaller man was sitting inside and started giving us direction about where and how to best jump in from the shore.

And that is how this story ends. Kind of. On arrival, we obviously screamed our lungs out while complaining about the service. Good for us, we got the whole 4-day-stay and food for free. I guess that it was all worth it, after all. And, hey, to date this is still the craziest travel story I have to share back home!

Interested in more travel stories from other lifestyle travelers? Check out our “Meet The Traveler” Series!

Lis is half German, half Peruvian, but was raised in the beautiful city of Barcelona where she lived until the age of 18. After that her life has been a total adventure. From Australia to Europe to the US to South America and Africa - the world is her home! Lis is a self-proclaimed digital nomad. While traveling, she has been growing her own personal brand on social media and has been working remotely for a prestigious European end-to-end travel enterprise. Recently, she also co-founded a company in the mindfulness sector that will soon launch worldwide. 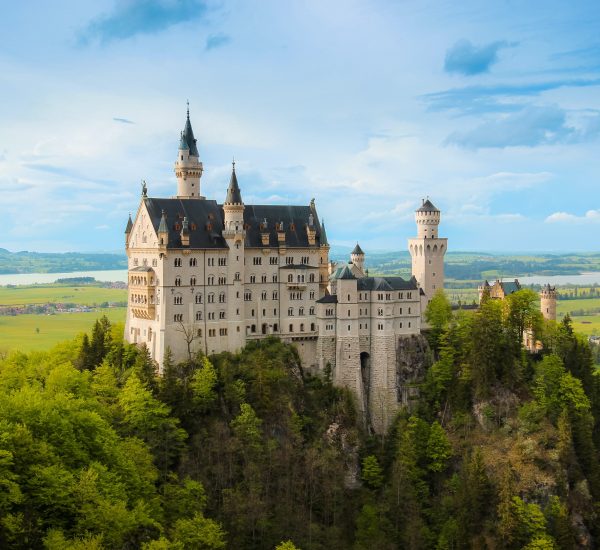 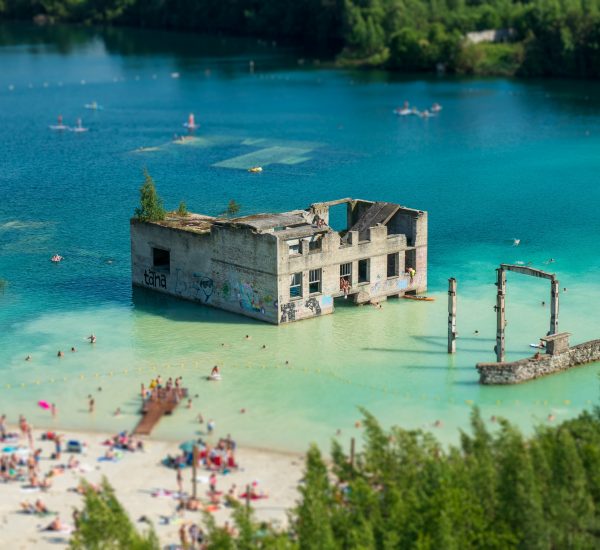 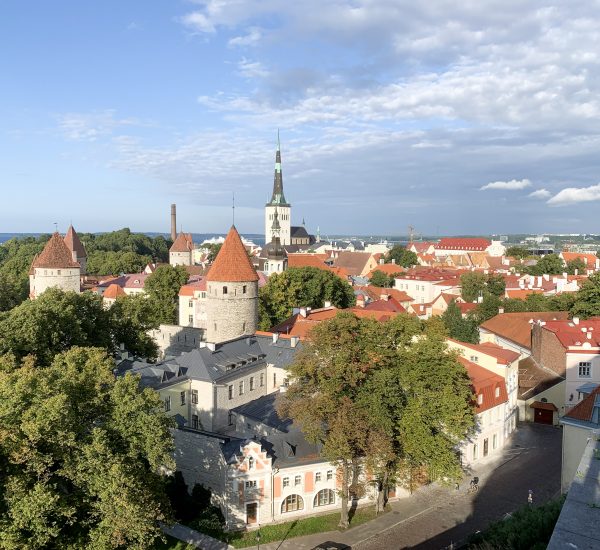 Top 5 Things To Do in Tallinn, Estonia 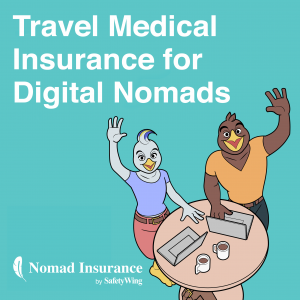